Cottage with a White Paling

An impression of almost unsurpassable brilliance.

Deep black, but displaying harmoniously balanced differentiation of burr effects, especially in the bushes and grasses in the foreground. With a light plate tone that becomes intensified almost imperceptibly along the edges.

Printed on paper with the countermark “LB” as specifically referenced by Hinterding.

With a paper margin measuring ca. 2 cm running continuously around the inky plate mark, through which the composition acquires a virtually singular sense of cohesion. Perfect.
The rare flawless overall condition of this sheet is further enhanced by its provenance from the first-class Rembrandt collection of H. H. Benedict, which according to Lugt was of d’un qualité exceptionelle…

Produced in 1648, the same year as the Saint Jerome beside the Pollard Willow, the Cottage with a White Paling is regarded as an artistic link that forms a transition from Rembrandt’s early landscape etchings to the late masterworks.

The view of the little peasant farmstead, almost concealed behind the plank fence, which is set below a dike, might depict a situation along the so-called Spaarndammerdijk, which stretched from Amsterdam toward Haarlem. Rembrandt first captured this picturesque scene in a drawing (Rijksmuseum, Amsterdam), although he altered this initial ‘draft version’ significantly when executing his etching: In the print, the cottage, which was the primary focus of the drawing, has been incorporated into a larger landscape, filled with typical details of the Dutch countryside. One particular element, however, a skull placed prominently in the foreground, endows the print with a broader meaning, suggesting the transitory nature of this perfect rural scene. This type of overt symbolism is rare in Rembrandt’s landscapes. Here it introduces into what would otherwise be a paradigm of the Dutch countryside a discreet reminder of the mortality of man and nature. (C. P. Schneider)

Cottage with a White Paling 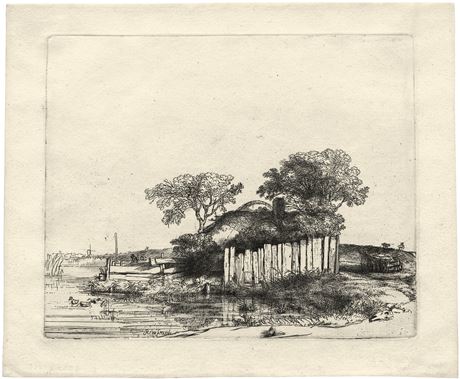 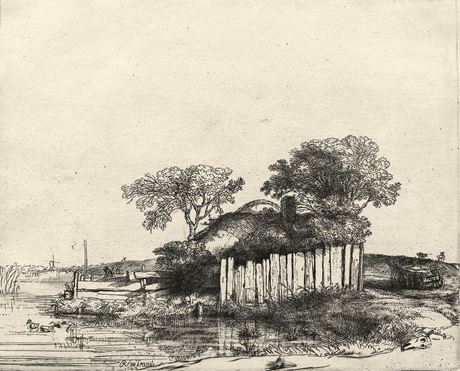