Death and the standing Woman

Superb impression of the extremely rare first state. Before the fourth hatching on the right shin-bone of the woman and before all further rework.

The by Pauli namely mentioned early impression from the Yorck von Wartenburg collection, that G. Novell-Usticke adopted to his famous Beham collection because of its unsurpassable brilliance.
Printed in sooty deep black ink with delicate platetone. Adequately described by the auction catalogue at C. G. Boerner, Leipzig 1932 as: Selten so schön. (Rarely as pretty) The auction catalogue of the Nowell-Usticke-Collection notes: This impression is finer than the one in the British Museum.

With 4-6 mm margins beyond the partly inky platemark. In perfect, untouched fresh condition.

In contrast to  Beham‘s >Lady and death< (Hollstein 150) cleaving to the north-alpine pictorial tradition, the present composition refers rather to the Italian version of the subject:
The nude woman… is an idealized, classicizing figure, a distinct type within the oeuvre of the Behams. The winged figure of Death derives from an Italian tradition for the depiction of Death. The two figures appear in a setting that includes ruined architectural fragments of the type that fascinated humanists and appeared frequently in Italian art. One of these architectural fragments, located in the lower right corner of the engraving, bears the Latin inscription and calls to mind the humanist interest in classical inscriptions. The Italian references in >Death and the Maiden< are as much a part of the subject as the >memento mori< theme. Sebald seems to have intended the engraving for an audience that would delight in his presentation of a northern theme in a pictorial language reminiscent of Italy and classical antiquity. (J. L. Levy in: Ausst. Kat. >The World in Miniature Engravings by the German Little Masters 1500-1550< University of Kansas 1988).

Composition especially sought after within the work of the artist.

Death and the standing Woman 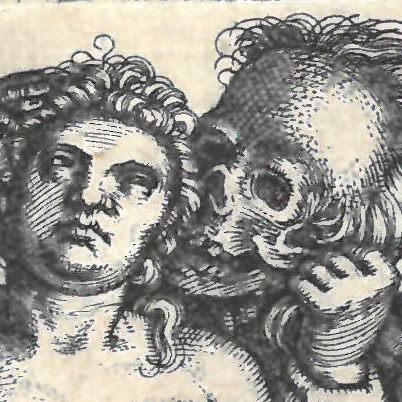 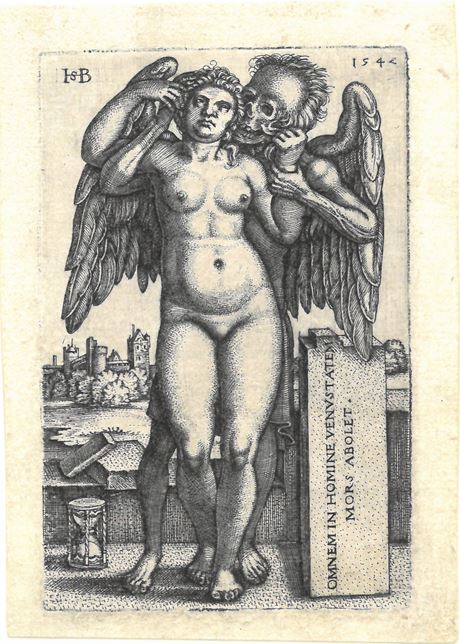