One of only 6 known, extremely rare trial proofs of the unaltered plate.

According to A. E. Sayre ( exhib. cat. The changing Image: Prints by Francisco de Goya, Boston 1974), such proofs were printed around 1848 and published privately, before the Academia de San Ferando acquired all 18 plates and had the series reworked for the first edition in 1864.
Before the later number.

As with the other members of the series, Goya himself pulled only a few working proofs from the plate. According to Harris, only two proofs have been traced.

Magnificent impression, printed in black ink, as described by Harris, displaying the richly nuanced grain so characteristic of Goya’s finely differentiated aquatint tone, particularly in the background, which is marvelously clear and transparent. 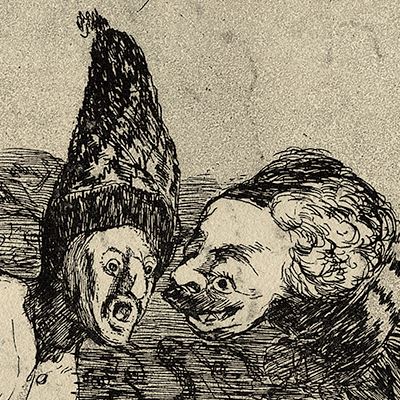