Fine impression of the rare single sheet executed by Eisenhoit with a combination of etching and engraving techniques on commission from the Nuremberg publisher Balthasar Caymox.

Cut down to the platemark or with very fine margins beyond it. With a barely perceptible horizontal drying fold. Otherwise in a fine state of preservation.


Eisenhoit’s Hercules und Omphale is based on a design by B. Spranger, who took up the theme of female power on a number of occasions. The likeliest model is a drawing in the Uffizi in Florence. Eisenhoit, however, borrows only the figures of the humiliated hero and his haughty mistress, combining them effectively with a depiction of the Pillars of Hercules at Gades, a reference to one of his the twelve labors. These create a contrast that allows his humiliation to seem all the more drastic. In the lines of text found beneath the image as well, Hercules admonishes the observer: Trembling before the Maeonian club, and unarmed, I am now forced to apply these hands to a woman’s distaff – hands that once struck fear in the sea, winged with sails, in the Earth, in wild beasts, in the Underworld and in Olympus, and in savage peoples. A woman, hardly fit to carry a distaff loaded with wool, carried weapons blackened with Lernean poison. O mortals, learn that there are poisons concealed in Love. Who Mars cannot conquer, is conquered instead, by love. 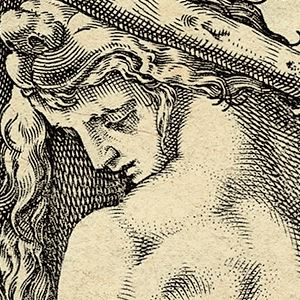 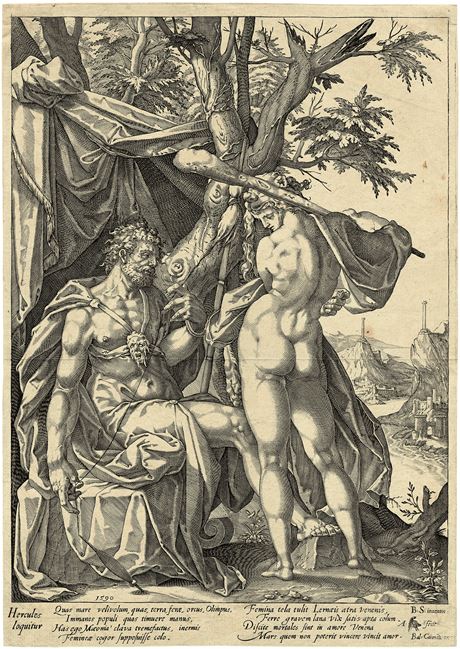