Resting Shepherd Leaning against a Pedestal.

A “pastoral idyll” filled with tranquility and harmony (H. Jedding)

The artist’s first etching in a splendid impression featuring the most beautiful atmospheric effects, thanks to the delicate plate tone and the still clearly visible vertical  polishing marks, mainly in the sky.


With the reworked area of sky, and with the altered date of 1664.


With paper margins measuring up to 2.8 cm around the inky platemark. Aside from an inconspicuous brown spot that is obscured by the fur of the standing sheep on the left, in quite excellent condition.

For his first attempt at etching, undertaken in 1660, Roos – who is regarded as one of the most important late-17th-century German animal and landscape painters – chose an unusually large plate , as though intending to compete directly with N. Berchem, one his great Dutch models. For the later etchings, most published in series, he chose smaller formats. With this immensely atmospheric single sheet, he succeeded already in producing his masterpiece as a printmaker: the light flows, picturesquely over the animal forms, casting dark shadows across the grass and vegetation, and giving the shepherd’s face a pleasant calmness under the wide brim of his large hat. The animals, with their contrasting poses, are excellently formed; their fur in particular is marvelously characterized. Only in shadowed areas is emphasis given to a few shaggy tufts, and the surface is handled more forcefully. Where the bright sunlight strikes the animals, the etching needle intervenes more discreetly, contenting itself with just a few intimations. In this image, the plasticity and airiness of the atmosphere are effective in the most delightful way. (H. Jedding)

Resting Shepherd Leaning against a Pedestal. 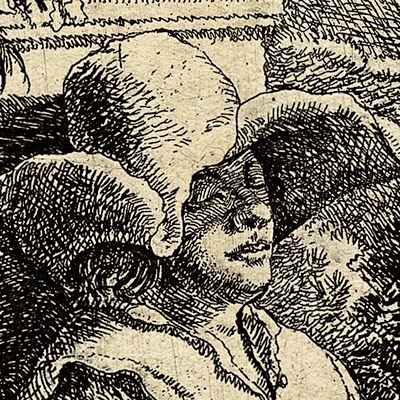 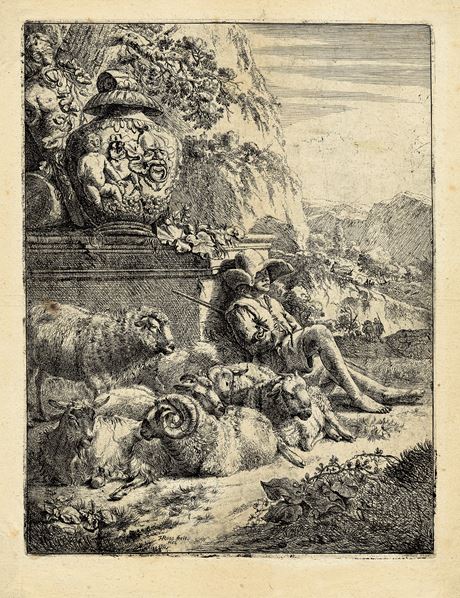