St. Sebastian Bound to a Tree

Indisputably one of the artist’s most important prints, whose grandiose figure of the martyred Sebastian H. Curjel referred to as a German Laocoön.

Like all of the others known exemplars, showing a vertical crack through the printing block, carefully retouched here. Impressions taken prior to cracking, as described by Hollstein, have not been traced to date, as referenced already by E. Brochhagen and J. Lauts.

According to them, completely flawless exemplars of particular compositions… are apparently very rare… The woodblocks produced since 1510 already show cracks, gaps and other breaches even in relatively early impressions… The comparatively good printing quality of many exemplars with wormholes suggests that a number of Baldung’s woodblocks were reprinted after a longer time of not being printed.

Printed on paper with the watermark ‘Gothic p below a shield with an imperial orb’ (similar to Meder wm. 324), like all the other fine impressions known, i.e. the ones in the British Museum and the Augustiner Museum in Freiburg.


It is a striking example of Baldung’s style produced during his period in Freiburg, when the production of Mathis Grünewald’s altarpiece in nearby Isenheim, which was completed c. 1515, made a significant impression on him. His idiosyncratic use of turbulent, tube-like clouds to convey a form of subjective emotion is also seen in the "Virgin an Child with a Donor" (H. 64), produced at the same period, and has the effect of merging the foreground with the background. These woodcuts are designed with a dense accumulation of lines which must have been particularly difficult to cut and print successfully, but the dramatic impact of Baldung’s image makes up for the lack of clarity of most the surviving impressions.
(G. Bartrum)

St. Sebastian Bound to a Tree 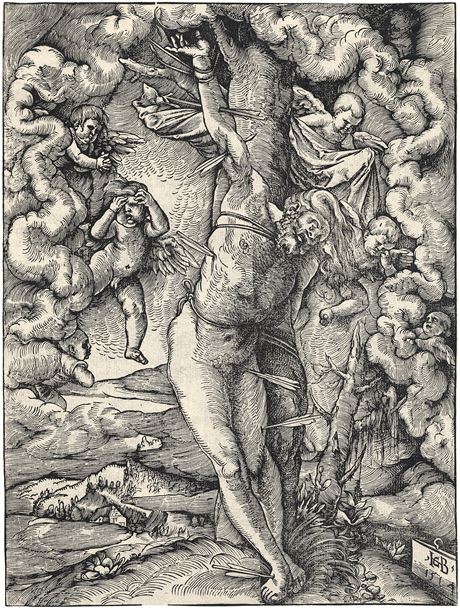 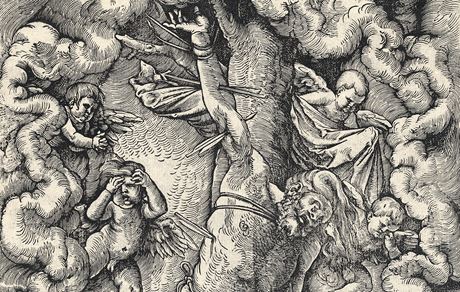