Excellent impression of one of the master’s most popular pictorial creations, and one that – despite the fact that the artist never actually saw a rhinoceros – determined the European image of this exotic beast for more than two centuries.
Showing the horizontal crack that continues through all four legs and the snout, as referenced by Meder specifically for the 8th edition, and the wormholes visible on the ear, eyelid, and horn.
Highly unusual at the same time by virtue of its exceptional clarity and the distinctness of the lineaments, so that the detailed graphic texture contrasts strikingly with the white of the paper. Wholly consistent with Dürer’s original intentions, unlike the immediately preceding edition issued by the Amsterdam publisher Willem Janssen, who had brought the RHINOCERUS onto the market as an effective chiaroscuro composition by means of a color printing block.
With 1-2 mm margins around the borderline. The right upper corner reattached, although this is virtually imperceptible. Otherwise perfect and radiantly beautiful.
This rhinoceros – which attained celebrity throughout Europe as a result of Dürer’s broadsheet – was shipped from India and arrived in Lisbon Harbor on May 20, 1515 as a gift for King Manuel I. The arrival of this animal, known previously to contemporaries only through Roman textual sources, elicited wonder and admiration. The news traveled fast, reaching Nuremberg via a detailed report from the printer Valentin Ferdinand, a resident of Lisbon, who was also active as a commercial broker and news agent. Ferdinand’s report, which may have been accompanied by a sketch, furnished the basis for Dürer’s composition, which he executed as a pen and ink drawing (British Museum) on paper before transferring it to the woodblock.
By marketing the >Rhinocerus< as a high-circulation broadsheet, Dürer accommodated the demand by contemporaries for sensations, catering to their delight in the fabulous natural forms and bizarre objects that were arriving in Europe by way of voyages of discovery and overseas commerce. But he also satisfied the prevalent curiosity about India, the rhinoceros’s land of origin. Ever since the spectacular expedition of three German ships which sailed from Lisbon to Kozhikode (Calicut) in 1505–06 as part of a Portuguese fleet, this strange land to the east had been the topic of endless discussion… (Y. Doosry 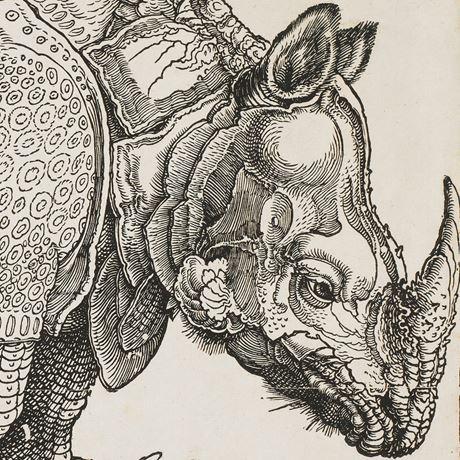