The first state, before the enhancement of the outline behind Adam, only existing as two impressions in London and Vienna.

With fine margins all around the tonally distinct plate mark.


Rembrandt’s etching of 1638 may be regarded as one of the psychologically most impressive depiction of the subject in the history of art. (Exhibition Cat. >Rembrandt. Der Meister und seine Werkstatt<, Berlin 1991)

The artist deliberately deviated from the traditional, a little bit  hackneyed image of the first human couple. These anti-classical Adam and Eve do not have much in common with the idea of paradisiacal beauty. Rembrandt’s realism and power of expression depict them as real human beings of flesh and blood, whose ability to decide by freedom of conscience respectively whose willingness to sin is absolutely plausible. The couple is represented against the light contrasting perfectly the bodies with the background, so that extraordinary subtle effects of light and shadows are modeling the surface of the bodies, as never seen before.

Rembrandt was criticized by seventeenth- and eighteenth-century writers on art for having shown the serpent, the Tempter, as a winged dragon rather than as the traditional snake. In our time, however, Christian Tümpel has pointed out that Rembrandt’s Satan was inspired by the wingless, lizardlike Satan draped over an archway that aims his spear at Adam and Eve in Dürer’s engraving of >Christ’s Descent into Limbo<. Rembrandt had acquired the >Small Engraved Passion<, the Dürer series to which this print belongs, in the very year, 1638…
(C. S. Ackley) 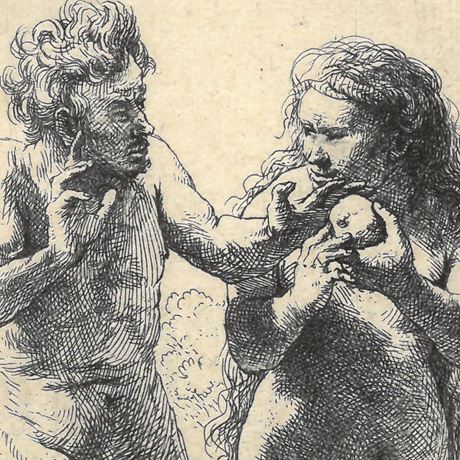 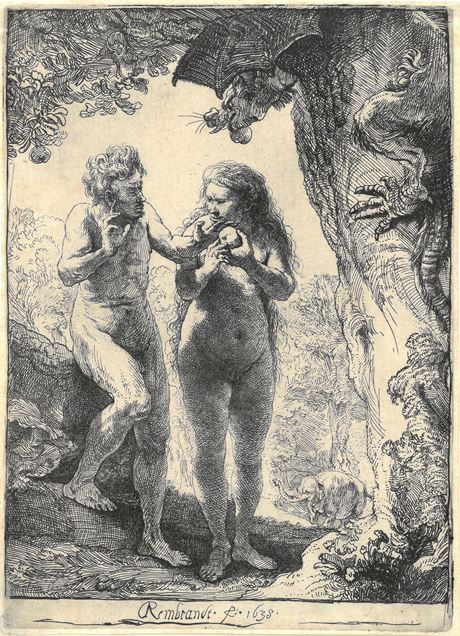