The Lady and Death.

Brilliant, deep, sooty black early impression of the subtle memento mori.
Before the reworking of the pleat of the dress immediately underneath  the sleeve, and before the added blade of grass in the tussock to the left of the flowerpot.


In the present engraving from 1541, Beham has direct recourse to his etching The Lady and the Fool, , which dates from the previous year. Below the Latin admonition Death abolishes all human beauty, he repeats the couple of lovers strolling past a grassy bench with just a few albeit highly telling alterations: the charmer in the fool’s costume now displays a skull under his fool’s cap, and presents his lover with an hourglass as symbol of the elapsing lifetime rather than handing her carnations.
J. L. Levi has pointed out the close resemblances to Dürer’s engraving Young Woman Attacked by Death from circa 1495, known as The Ravisher (Meder 76), and Hans Baldung Grien’s Basel panel Death and the Woman from 1517: These works (and numerous other images by Baldung) are all sexualized, showing Death seizing or embracing a woman. In Dürer’s The Ravisher, the woman is seated on the lap of Death, and two of them are on a grassy bench that evokes a Garden of Love. In various works by Baldung, the images are sexualized by the nudity of the women and the embrace of Death. However these images differ from Sebald’s in one important respect. Violence characterizes Dürer’s The Ravisher and numerous images by Baldung where Death is a rapist who violates his victims. In contrast, Death is a courteous and attentive, albeit foolish, lover in The Lady and Death. Sebald’s gentler image is in keeping with the playful approach that characterizes his prints.

The Lady and Death. 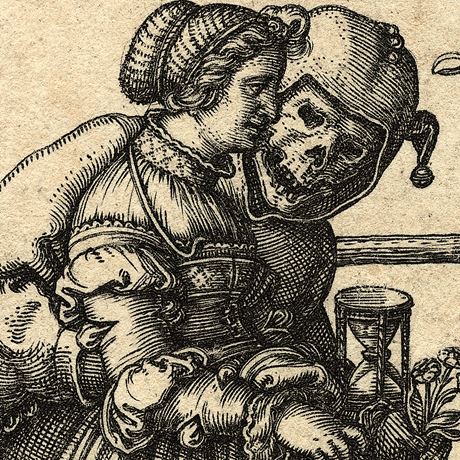 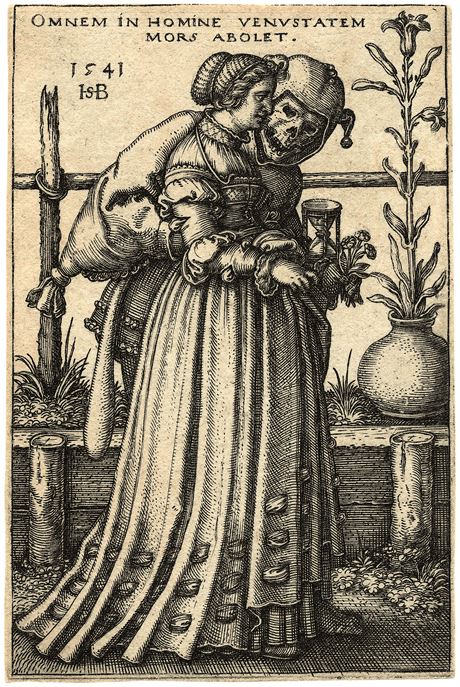