Printed in a homogenous deep black without any imperfections so that the system of now swelling, now diminishing lines, so reminiscent of Goltzius's so-called "Spranger style," is shown to ideal advantage in shaping the human forms as well as in the dense hatching lines of the background by means of which Sadeler generates a contrast with the effectively illuminated figures, capturing the chiaroscuro effect that is characteristic of Spranger's compositions of the 1590s.

With fine margins around the plate mark. Three tips of corners are chamfered. A small brown stain is visible on Hercules's hip, otherwise in very beautiful, fresh condition.

Aegidius is regarded as the most productive and talented engraver of the Sadeler family to have worked after compositions by B. Spranger. Having advanced to the status of engraver to the Imperial Court in 1597, he may have been familiar with Spranger's pictorial creations at first hand.
The model for this engraving, which is no longer traceable, belongs to a group of works in which the artist was repeatedly preoccupied with the theme, drawn from classical legend, of the purchase of Hercules as a slave by the Lydian Queen Omphale – a subject with an emphatic erotic charge that highlights the power of women. While the hero of antiquity, impelled by love, abases himself before his mistress, condemned to wearing her dress and spinning cloth, she has meanwhile appropriated his trappings. Her right hand resting on his club, she wears his lion's pelt jauntily on her head as a fashionable accessory, turning triumphantly toward the viewer. She does not seem to have noticed that Hercules, despite his despondency, apparently has begun to regain his confidence. Hinting at his former boldness, he places his foot on the club, which by rights belongs to him.

Free of such irony, the verses along the lower margin extol the power of love:

He whom neither death nor Mars terrifies, nor the bright stars of the sky oppress, nor the thick shadow of Erebus causes to flee, he who conquers all, having been conquered, yields to love. He exchanges the [lion's] skin for the garment of a courtesan, the club for a spindle. All things are in the manner of a woman, and he himself is not Alcides [Hercules]. So much power does a beloved woman have. 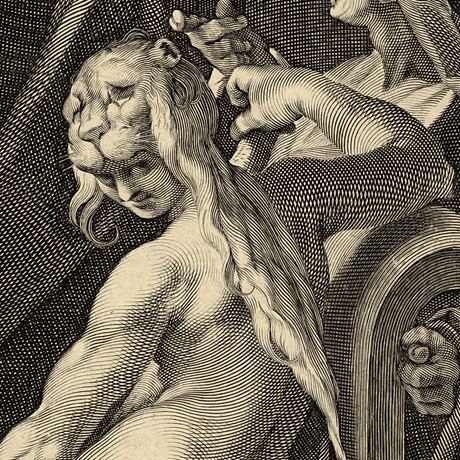 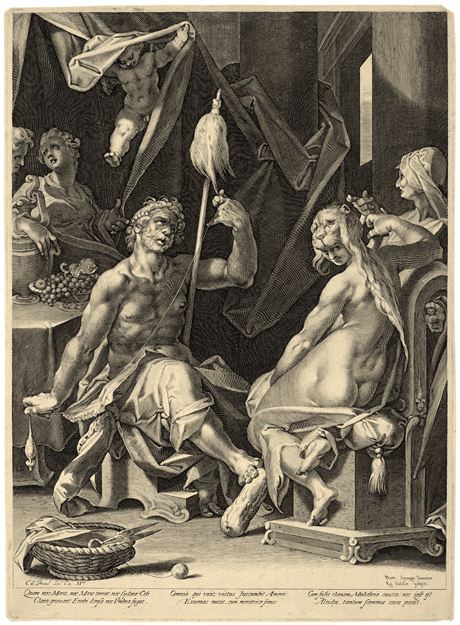